Pacoima’s Laurel Pharmacy to shut down after a half century 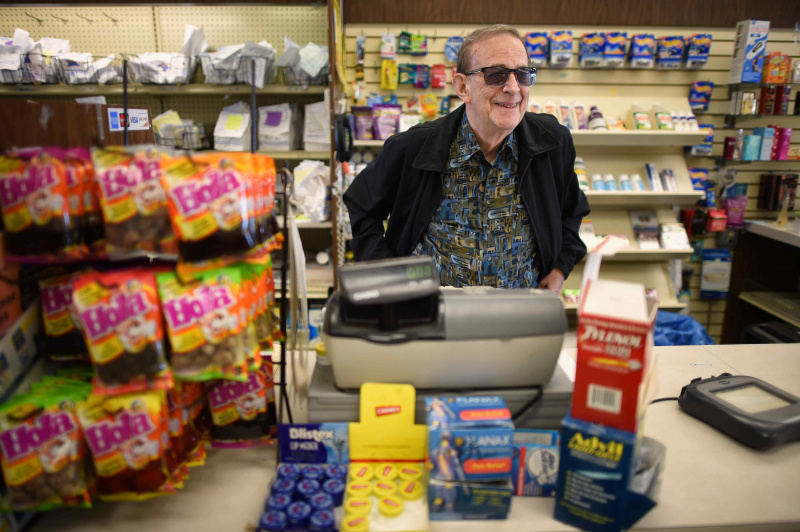 Barry Wise trundled up to the back door of his shop, turned a key in the lock, and stepped into the Pacoima drugstore he’d owned and operated for nearly 50 years.
He’d served generations of families from his Laurel Pharmacy. He’d run the once go-to store for prescriptions to cosmetics within the San Fernando Valley’s historic community of minorities. He’d been robbed at gunpoint more times than he could remember and had dispensed soothing advice and medicine more times than he could recall.
And now the 76-year-old druggist was about to call it quits.
“It’s going to be gone, that’s the part that hurts,” said Wise, setting down a McDonald’s coffee and muffin as he gazed around his drugstore a recent morning before it opened. “I wanted there to be a store here. I’ve had three generations of customers — from parents to kids to their kids.
“But I couldn’t find a buyer, so it’s sad.”
The Laurel Pharmacy on the corner of Van Nuys Boulevard and Rincon Avenue has for at least six decades stood as a community provider of drugs, whatnots and essential miscellany.
On Wednesday, however, it will fill its last prescription. Rite Aid will buy its remaining merchandise and pill bottles, while seeking to recruit its remaining customers. Its four long-time employees, including a part-time pharmacist, will look for other work.
For decades, Wise and his staff had catered to a tight-knit Pacoima — a white Pacoima; a Japanese-American Pacoima; a black Pacoima; and now a majority Latino Pacoima.
Once open seven days a week, Laurel Pharmacy was a shoe-box shaped general store once packed with greeting cards and magazines in English and Spanish, cosmetics geared to both blacks and Latinos, multicultural herbs and vitamins, paper goods, candy and gifts. Plus a full-service Rx counter.
During Christmas, it was once the place in Pacoima to buy decorations.
“We know everybody,” said Lupita Marquez, a pharmacy clerk of 36 years. “We’re an icon of Pacoima. Say Laurel Pharmacy, and right away they know what you’re talking about.”
It was Wise who, after obtaining a pharmacy degree after working in his father’s drugstores in their native Connecticut, lit out in a 1962 Mercury Comet bound for California. The money would be good. And in his native Hartford, “there was nothing to do but bowl.”
In Los Angeles, he said, “his Jewish nose pointed him to Pico-Robertson.” But he soon gravitated to the Valley, where he worked for White Front Pharmacy in Canoga Park. And when in 1969 he got a chance to buy Laurel Pharmacy.
People he knew said, “What the hell are you doing in Pacoima? It’s a bad neighborhood,” he said. “And I said, ‘Not bad for me. The people are wonderful … I love it here.”
Wise, who has 10 kids, 26 grandchildren and four great grandkids, met his wife Flo in the pharmacy 41 years ago. Over the years, it has supported baseball, basketball and football at San Fernando High School, in addition to local Little League teams.
Next to commendations from the city and local charities along its walls hangs an undated news clip of how Wise and his staff once saved the life of a sick immigrant girl. When her mother brought her in for vitamins, the pharmacy had her rushed to a hospital for virulent tuberculosis.
Loyal customers included local nuns and the family of late Pacoima rocker Ritchie Valens, who has a park named for him nearby. When the 1994 Northridge earthquake turned the pharmacy upside down, neighbors reassembled the store before noon.
But it was during the street drug epidemic from the 1970s to the 1990s, however, that Laurel Pharmacy was held up regularly at the point of a knife or gun. Nobody was ever hurt. “One time I was on the phone with my mom, in Connecticut, and said, ‘Hold it Mom, I’ll call you back. We’re being held up,’” Wise recalled.
Wise blames changing retail practices and drug prescription reimbursement policies he says will put all independent full-service, family drug stores like his out of business within five years.
The drug market is glutted with too many pharmacists, he said. And after the Affordable Care Act, otherwise known as Obamacare, he said drug reimbursements from insurance companies have plummeted.
In addition, some insurance companies are now contracting exclusively with big chain pharmacies, he said, shutting out the mom-and-pop drug stores.
Big-box retail centers such as Target have also lured away Main Street business.
“Profits are eroding,” said Wise, who lives in Northridge. “That’s really the main reason I want to leave. Plus, my body is eroding. Last year, I had to go into savings to pay my bills. This year, it’s going to be worse.”
One of the pillars of the Pacoima business community looked out onto the street he’s stared at for 47 years, including its many barber shops, its machine shop, medical clinic and longtime liquor store.
He then peeled back the security bars for the dawn of another work day that would be near the pharmacy’s last.
“I always listen,” said Wise, slightly stooped, with hazel-green eyes, and a quick laugh, of his years in the corner shop. “I talk to everybody — those that I can, because I don’t speak Spanish. The customer comes first. Here, they’re patients. At pharmacy chains, it’s the opposite.”
“When you retire, who’s going to support me?” said Dina Ruiz, 62, of Van Nuys, his first customer of the day. “I am a good customer. This man, he’s a beautiful person; I’ve known him 26 years.
“He gives me confidence. And comfort, with medicine. He’s sweet. I’ll miss him a lot.”
http://www.dailynews.com/business/20160409/pacoimas-laurel-pharmacy-to-shut-down-after-a-half-century 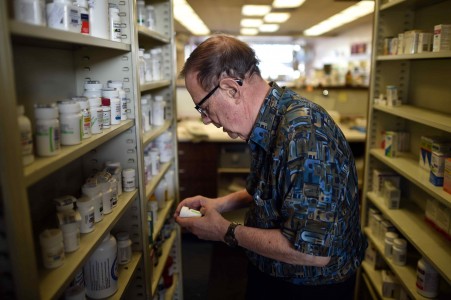