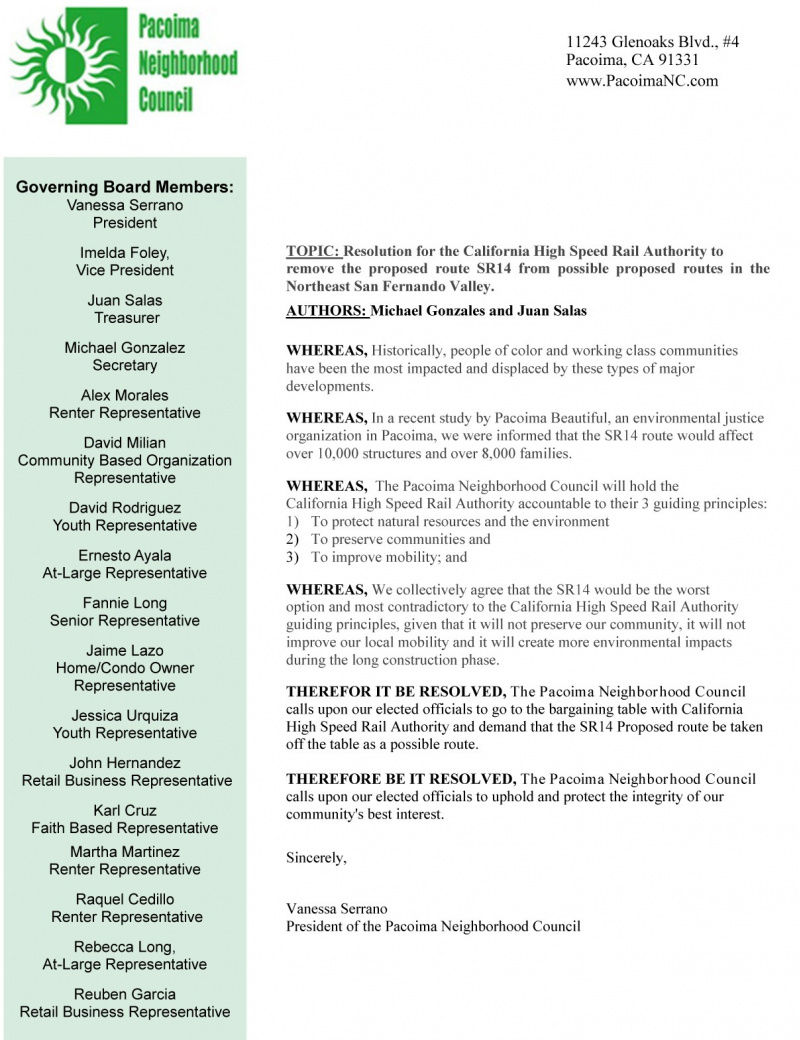 TOPIC: Resolution for the California High Speed Rail Authority to remove the proposed route SR14 from possible proposed routes in the Northeast San Fernando Valley.
AUTHORS: Michael Gonzales and Juan Salas
WHEREAS, Historically, people of color and working class communities have been the most impacted and displaced by these types of major developments.
WHEREAS, In a recent study by Pacoima Beautiful, an environmental justice organization in Pacoima, we were informed that the SR14 route would affect over 10,000 structures and over 8,000 families.
WHEREAS, The Pacoima Neighborhood Council will hold the California High Speed Rail Authority accountable to their 3 guiding principles:
1) To protect natural resources and the environment
2) To preserve communities and
3) To improve mobility; and
WHEREAS, We collectively agree that the SR14 would be the worst option and most contradictory to the California High Speed Rail Authority guiding principles, given that it will not preserve our community, it will not improve our local mobility and it will create more environmental impacts during the long construction phase.
THEREFOR IT BE RESOLVED, The Pacoima Neighborhood Council calls upon our elected officials to go to the bargaining table with California High Speed Rail Authority and demand that the SR14 Proposed route be taken off the table as a possible route.
THEREFORE BE IT RESOLVED, The Pacoima Neighborhood Council calls upon our elected officials to uphold and protect the integrity of our community’s best interest.
Sincerely,
Vanessa Serrano
President of the Pacoima Neighborhood Council