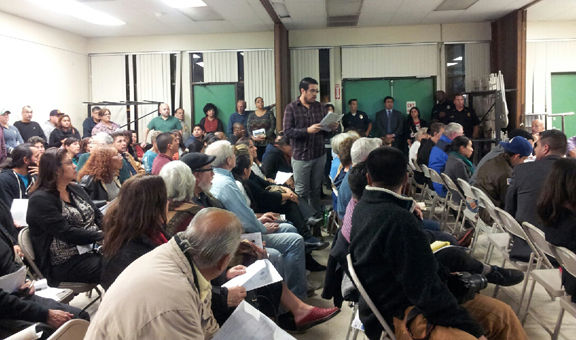 The Pacoima Neighborhood Council held a public meeting on Wednesday, Jan. 20 to discuss the SR 14, one high-speed rail route currently proposed to travel above ground through Sun Valley, Pacoima, the City of San Fernando, Sylmar and through the foothills.
The community room was filled to capacity, with many people standing. Several key members of the Pacoima Neighborhood Council sat facing the crowd. High-Speed Rail Authority’s Southern California Regional Director Michelle Boehm delivered a well-crafted power point presentation and emphasized that several factors would be considered before a decision was made on which route would be selected.
Boehm said they encouraged input and were still gathering information and acknowledged that residents had been sent letters asking for access to their property. “It is strictly voluntary, and our scientists would come at a time convenient to you,” she said. Boehm also told the residents the process of gathering information was still in a “preliminary” stage.
Residents who attended the Pacoima Neighborhood Council were concerned that the decision could be made based on a community’s ability to mobilize residents and fight back. Boehm said that wouldn’t be a deciding criteria, but residents weren’t so sure.
Michael Gonzales, Pacoima Neighborhood Council president, referenced the recent meeting at the All Nations Church in Lake View Terrace that drew more than a thousand people protesting alternate proposed route known as the East Corridor that would impact the communities of Lake View Terrace, Shadow Hills, Kagel Canyon and the Angeles National Forest. The crowd included a well-organized horse community that presented videos about the disruption to their tranquil rural lifestyle, and the harm that could be dealt to the environment, including the Angeles forest.
Read more at http://www.sanfernandosun.com/news/article_62527aa6-a7ce-11e4-b511-3bd206afe4cd.html