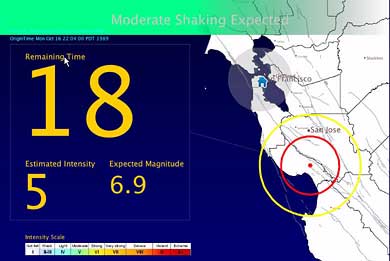 “Our partners at the US Geological Survey and Caltech have been working on the development of a cutting-edge early warning system.” Mayor Villaraigosa said. “We’re proud to provide this additional funding to improve the system’s capacity and bring it to the level required to make earthquake early warning a reality in Southern California.”
The USGS, in partnership with CalTech, UC Berkeley, and the Southern California Earthquake Center, has been developing an Earthquake Early Warning system for Southern California since 2006.
The objective of earthquake early warning is to rapidly detect the initiation of an earthquake, estimate the level of ground shaking to be expected, and issue a warning before significant ground shaking starts. This can be done with sensors placed near active fault zones that detect the first energy waves to radiate from an earthquake.  Those first waves travel at the speed of sound but cause little damage.  The following waves, which bring the strong shaking that causes most of the damage, travel slower.  The greater the distance from the epicenter, the longer the warning time which can range from a few seconds to a few tens of seconds.
Those seconds could:

When the magnitude 9.0 earthquake struck Japan in March 2011, 50 million residents received warning in advance.  The country’s earthquake information systems gave people about 200 miles away in Tokyo up to 30 seconds or more to prepare before strong shaking from the epicenter reached them. People closer to the epicenter, which experienced the strongest shaking from this offshore event, received up to 5-10 seconds warning.
For further information, visit www.shakealert.org